Artists have always written about art. And, like other writers in recent years, the internet has provided them a platform to do so outside of entrenched media. Websites like Brett Baker’s Painters’ Table have developed an audience by curating myriad artist-run blogs managed throughout the years. And yet, Greg Allen of greg.org observed, “So many of my go-to artist-blogs ended in 2015.”

According to Sharon Butler, the artist behind the long-running Two Coats of Paint, social media has provided a democratic platform for artists to talk about art, and many would-be bloggers have made their homes there. “Now that artists tend to congregate on social media platforms like Facebook and Instagram to discuss their work and ideas, they aren’t starting as many blogs as they used to,” Butler tells Artspace. In fact, many of the artists recommended for this list post through Tumblr (Paul Soulellis and many others) and Instagram (Teju Cole).

But this opening of the dialogue has also provided some opportunity for historically marginalized voices to entrench themselves in more mainstream discourse. Many newer blogs emphasize specific perspectives. ARTS.BLACK, launched in late-2014, publishes writings by critics of African descent; contemptorary told Creative Capital Blog they publish work on and by “women of color, queers of color, indigenous and political refugee artists.”

From each publisher, we wanted to know four things: What called them to write about art? What do they tend to write about? What’s the most important thing for art writers and critics to be writing about today? And what artist blogs do they read themselves? This last question we used as an opportunity to expand the survey, hopefully giving a fuller view of the field of artist blogs, rather than limiting the perspective to that of one or two editors. In addition, we asked each publisher what they believed to be the most important topic for art writers and critics to be talking about today. Those answers, because of their immediacy, are included in their entirety.

Two Coats of Paint is among the most-established artist-run blogs, having been sponsored at various points by museums like the Guggenheim and Whitney, and schools like SVA and RISD. It received a Creative Capital/Warhol Foundation Arts Writers Grant for blogging in 2013. Sharon Butler told Artspace that she began Two Coats of Paint in 2007 when she “returned to painting after spending a couple years working on installations and digital projects.” At that early stage, it was structured as a digest format, sharing links to painting criticism Butler read online, but soon expanded into original writing and began a residency in 2015. Two years ago, Butler also began commissioning contributions by other artists and writers following a fundraising campaign and instating modest ads on the site.

As the name suggests, “Two Coats of Paint is primarily about painting,” Butler said. However, she noted, “I have a broad definition of what painting might be. I try to publish posts that put the work into a cultural or political context. What do recent paintings reflect about our circumstances?” For Butler herself, who maintains an active studio practice as a painter, this often means writing about “the intersection of painting and other media, and digital influence.”

What’s the most important topic for art writers to be covering today?
“Artists and writers must respond to the world around them. With the Trump presidency, our country is in the middle of a constitutional crisis. We are surrounded by ‘alternative facts,’ political corruption, treasonous leaders, and other serious threats to democratic principles. Everything I have been writing has been filtered through that lens since the election.”

Contemptorary—note the extra “t”—is a collaborative project co-run by Eunsong Kim and Gelare Khoshgozaran, that emphasizes the idea of “contempt” as “a commitment to clearing the horizon for necessary ruptures.” In practice, this makes for pointed, iconoclastic writing that’s frequently, by necessity, uncomfortable—exactly what good criticism should be. Kim began publishing art criticism in 2013, after coming to art from literary and cultural studies; Khoshgozaran began writing about art in 2006 while translating articles, essays, and books of art history and criticism in Iran. The two met online in 2014 and launched contemptorary in 2016.

Focusing on essays and interviews, contemptorary publishes thematically curated issues—the first feature was themed “freedom = oppression”—and will soon begin organizing symposiums, print issues, and exhibitions. This format, contemptorary told Artspace, allows them to avoid contributing to “the economy that out-of-context exhibition reviews create.” Publishing writings both individually and co-authored—as well as commissioned contributions—the duo said they’re “interested in difficult questions that don’t necessary have a clear answer or may not be resolved in one or two think pieces.” Recently, this has led them to “think a lot about art and finance, archives, digitization and technology, and the thoughtful and subversive ways some artists and thinkers have engaged in those practices.” Contemptorary was awarded a Creative Capital/Warhol Foundation Arts Writers Grant for blogging in 2015.

Begin With:
The Freedom to Oppress (April 19, 2016): Contemptorary told Artspace that this 2016 essay by Kim and Maya Mackrandilal is exemplary of the kind of criticism they aim to publish. In it, the authors “take up how the word ‘freedom’ has been used in art to protect the violences found in the gestures of white male artists.”

What’s the most important topic for art writers to be covering today?
“We hope we can continue to discuss power, and what the discourse of power has meant in visual and cultural production. We find that there’s a tradition of art criticism and art writing that works to evade art’s relationship to power. For example, why are art writers going out of their way to depoliticize George Bush by politicizing his portraiture paintings? The relationship between portraiture paintings and state rulers has a historical continuum. The practice of art, the gesture toward expression, does not absolve us from the political positions we’ve taken, participate in actively or passively, or advocate. It has always been essential for us to pressure the tissues between expression and power—but now more than ever. This might mean that everything is racialized, gendered—we mean everything. Perhaps there can be more writing on the ‘Minimalist Brotherhood’ that can address its whiteness, hyper-masculinity, and access in relation to the usage of steel materials. Maybe this might mean that historical writings on Marcel Duchamp center his whiteness to re-read the entire historical formation of found object art. Just some thoughts we’ve had, projects we want to work on, putting them out there in case others want to participate.” 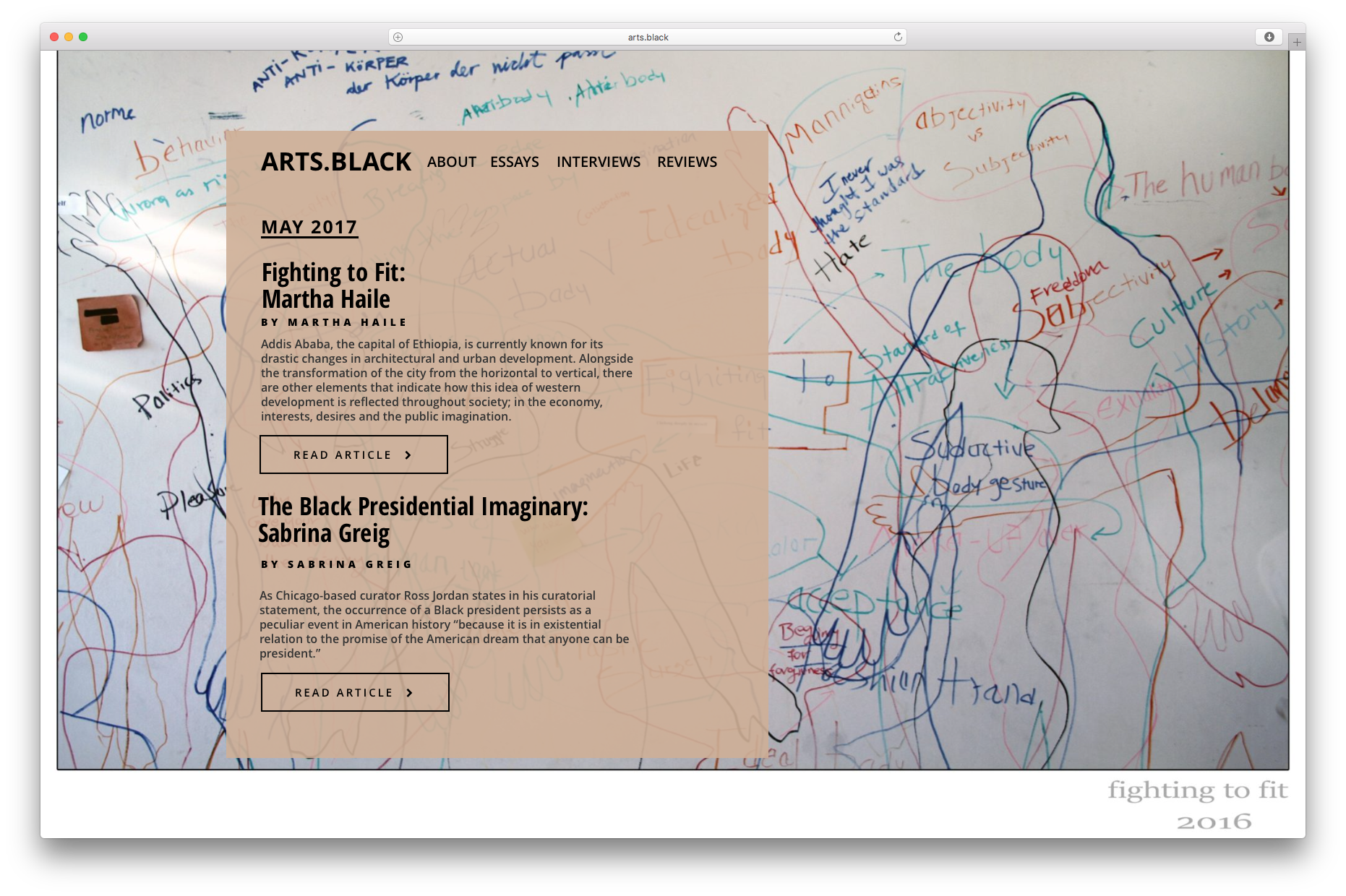 Neither Taylor Renee nor Jessica Lynne are artists, but ARTS.BLACK was consistently recommended by the publishers of other artist-run blogs. Renee, a Detroit-based writer and curator, and Lynne, a Brooklyn-based writer and arts administrator founded ARTS.BLACK in 2014, dedicated to publishing art criticism from Black perspectives. “As we entered the cultural workforce and encountered conversations about equity,” Lynne told Artspace, “we immediately began to realize that the world of arts journalism and writing also needed to be included in such conversations. At the same time, we were keenly aware of the rich lineage of Black cultural criticism as well as a contemporary crop of black writers who deserved to be published more consistently—we counted ourselves as part of that group.”

ARTS.BLACK has recently reduced the number of texts it publishes to two a month, which they said allows them to maintain a level of thoughtfulness and rigor. “As a journal, we prioritize and publish the writing of critics of African descent,” Lynne said. “That mission is deeply important to us, however aside from that, we don’t place restrictions on our contributors’ writing.” As such, essays and interviews touch on painting, photography, film, poetry, and everything in-between.

Alive Someplace Better: EJ Hill’s Horizontal Poetics (August 5, 2015): Amber Officer-Narvasa writes that the work of EJ Hill, a former resident of the Studio Museum in Harlem, “encourages us to think about how to represent Black pain in a way that doesn’t compromise Black humanity, how to understand own our wounds without having them define us.”

What’s the most important topic for art writers to be covering today?
“On a basic level, we want critics to think about the ways in which art and cultural production, more broadly speaking, offers us new questions and language for thinking about the complexities of the world, complexities that have always been present.”